Purpose: To train players to move their feet while fielding ground balls at different distances

How it works: To set up, place three cones in a linear fashion between home plate and a player in the field, spaced at three different distances. Starting at the cone furthest from home plate, the player fields a ground ball that the coach hits in her direction. The player fields the ball, then moves up to the next cone and prepares to handle another grounder from the coach. Once the player has fielded at all three cone positions, the drill reverses. Starting at the cone nearest to home plate this time, the player fields the ball, then backpedals to the next furthest cone and prepares to handle the next grounder and so on. The main idea is to always keep the feet moving.

Variations: Set up the drill with multiple players on the field in their normal positions. Give each player an opportunity to field the ball, throwing the ball to a base before ending their turn. After all players have fielded the ball, move everyone back and repeat the drill from a longer distance. To force players to focus, another variation is to scatter cones around the field that are the same color as the ball. Players must concentrate to separate the ball from the cones as they execute the play.

Requirements: One to multiple players, cones, a bat and a bucket of balls, a softball field or gym, and a coach 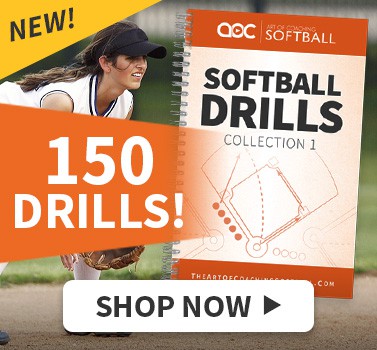